Responding to violent extremists requires a long-term strategy that prioritizes partnerships and addresses underlying grievances that help to fuel recruitment, said experts and elected officials at the CVE Symposium in Washington, D.C. 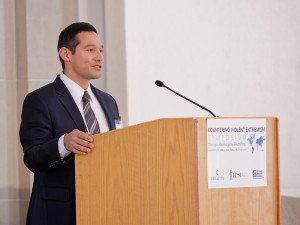 Leland Kruvant, President of Creative Associates International, emphasized the value of local partners, speaking at the CVE Symposium on April 6.

“Without question, local communities are the most powerful asset we have in the struggle against violence,” said Leland Kruvant, President of Creative Associates International, during the opening of the CVE Symposium, April 6.

The two-day event—which was attended by more than 250 top thinkers from government, the tech sector, international development, the military, academic institutions and elsewhere—addressed pressing challenges, including the role of data, reintegration of former extremists, women’s inclusion in CVE and degrading extremists’ narratives through traditional and social media.

Creative and the International Peace and Security Institute organized the CVE Symposium.

Successfully preventing and countering violent extremism requires a deep and nuanced understanding of local contexts, including the roles and opportunities for youth, livelihoods, educational curriculum and governance, said Kruvant.

“It means understanding and respecting the dignity and circumstances of the people we seek to help and effectively addressing the root causes of violent extremism,” said Kruvant, highlighting as an example Creative’s successful partnerships with community organizations, government agencies and religious leaders in Northern Nigeria. 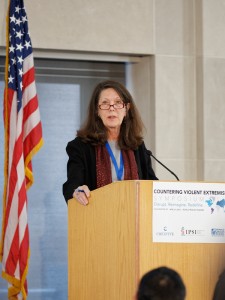 Pamela Aall, Chair of the Board of Directors for the International Peace and Security Institute, addressed the CVE Symposium on April 6, underscoring the need for effective prevention and mitigation measures.

Through these partnerships, development practitioners can begin to address many of the underlying economic, social and political grievances that these groups often exploit to recruit young men and women, speakers said, noting that this prevention-oriented approach requires a long-term strategy for local community development.

For example, Creative uses a whole society approach that engages local organizations, religious leaders, government officials and others in the design and implementation of programs.

Paul Turner, Senior Advisor on Conflict at Creative, said the organization engages a diverse set of actors during the entire process.

“For us, a comprehensive approach empowers communities through evidence-based solutions,” he said.

Pamela Aall, Chair of the Board of Directors for the International Peace and Security Institute, said on April 6: Ultimately, “prevention and mitigation are more effective than reactive measures.”

To view recorded sessions from the CVE Symposium, visit Periscope @CVEcommunity or follow the #CVESymposium conversation on Twitter.

United Nations Secretary General Ban Ki-moon urged that the global response to violent extremism reflect the universal values of human rights for which the U.N. stands.

Ki-moon cautioned that violating human rights in the service of countering violent extremism would not only do damage moral damage but would also be “strategically disastrous.”

Addressing the CVE Symposium via video message on April 6, the Secretary General said that the U.N. General Assembly has welcomed his initiative to launch a plan of action to prevent violent extremism. 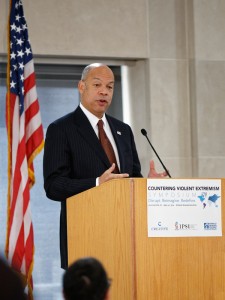 In the United States, efforts to prevent people from joining violent extremist groups must work hand in hand with the communities where these youth live, explained U.S. Secretary of Homeland Security Jeh Jonson, who delivered keynote remarks on domestic community engagement on April 6.

“We need to build bridges to communities, not vilify them, not isolate them, not drive them into the shadows,” said Johnson.

The Secretary of Homeland Security used the event to underscore that the U.S. government is not targeting Muslims in the United States, emphasizing that the overwhelming majority of the more than 3 million Muslims in the country are patriotic with a vested interest in protecting their communities.

“As we build bridges to communities, we need to recognize that there is indeed an ‘s’ at the end of that word,” he said, referring to the fact that communities are not homogenous and are comprised of many groups. 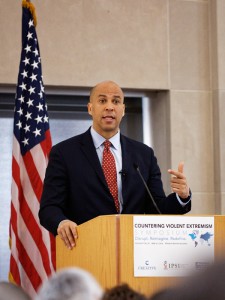 Sen. Cory Booker delivered the keynote speech at the CVE Symposium on April 7 and spoke about the need to amplify the “right voices” in messaging to counter violent extremism.

To be successful at preventing violent extremism, the government cannot work alone, said U.S. Sen. Cory Booker, during the April 7 keynote. This sentiment was echoed by several presenters throughout the CVE Symposium.

“We have to start looking at CVE in a very comprehensive way,” said the New Jersey Senator.

This includes collaboration among governments, civil society, the arts, science, technology and other fields, and a combination of data-driven online and offline strategies that adhere to what works in practice and have proven effective, he said.

“There are a lot of good ideas…but we need to make sure that we are measuring and have ways of measuring what’s effective and what’s not,” said Sen. Booker.

Instead, the voices of former, disillusioned extremists and other youth will be far stronger at preventing other young people from joining these movements, said Booker.

However, governments can help to amplify these voices by investing in youth—the “right” types of disruptive voices—and youth-driven innovations in this space. Off-ramps for extremists will also be a key piece of a successful and comprehensive strategy, he added.

Booker said that together concerned citizens and governments can come to together to discuss “how are we going to fight the challenges of the future with tools and skills that represent the enlightenment of today.”